‘Avenue 5’: Hugh Laurie on the Underlying Significance of His Space Captain’s Big Secret

Posted on 12th February 2020 By davidsharp

While making his onscreen debut in Armando Iannucci’s HBO series, Hugh Laurie gets the hero’s treatment. Doors part, the silver-haired leader emerges, and Laurie’s character strides down a hallway filled with supporters, greeting them with an encouraging smile and a heartening quip. They’re all thrilled to see him, and why shouldn’t they be? Senator Tom James is there to save the day.

Oh, I’m sorry — did you think we were talking about Captain Ryan Clark, Laurie’s part in the new HBO series, “Avenue 5”? Well, you’re not wrong. The same description applies to both roles Iannucci created for Laurie: the coveted Vice Presidential candidate called in to save Selina Meyer’s campaign on “Veep” and the captain of a luxury cruise ship tasked with saving the lives of everyone onboard.

“I had not thought of that,” Laurie told IndieWire while comparing the two roles. “There I was, thinking this was a big departure for me, and you pointed out that I’m actually doing exactly the same thing.”

This, of course, isn’t true. The self-deprecating actor enters a bizarre new world in “Avenue 5,” as the freshmen comedy imagines a near-future where luxury cruise ships set sail through the stars instead of the sea. Space yoga, ships named after streets, and some very alarming hair styles are just a few of the many world-building choices audiences have to absorb in fast-paced 30-minute chunks, which — along with his character’s own complicated backstory — initially had Laurie concerned how it was all holding together.

“There were moments when we were shooting it, when we all felt, ‘We’re taking this for granted now — the logic of all of this,’” Laurie said. “Of course, any new venture is a gamble. [But] I’d have to admit, [this show] has longer odds than some because it is not using any of the familiar mechanisms that people want to know. Usually, [viewers] want to know if it’s a procedural, a murder thing, a legal thing, or a medical thing, and they want to know roughly the world they’re going to be in. This resolutely refuses to give you that.”

What it does give you is a fairly big twist [spoilers ahead]: Much like Laurie’s last Iannucci-penned part, Captain Ryan Clark is not all he seems. Both characters are frauds. James is just like all the other “Veep” politicos — a power-hungry cheat — while Clark is being paid to pretend he’s a captain. Where once stood a man to believe in, there’s only an empty symbol. “Avenue 5” examines the value of that symbol in a time of crisis. The ship has veered off course, and the crew needs to find a new way home. Maybe Laurie’s captain can’t chart that course himself, but can he inspire those who can?

That’s a far different approach than what we saw in “Veep.” Tom James, the embodiment of a perfect politician, had to be stripped down to size because that’s the core argument of Iannucci’s satire — no politician is pure of heart; they only have to look that way.

“In politics, that skill of being able to walk down a corridor, remember everybody’s name, charm everybody, and get them to do your bidding — that is the whole job,” Laurie said. “Whereas for Captain Ryan, that ought to be like icing on the cake; the cake being knowing how to pilot a spaceship, which he plainly does not have.”

“Avenue 5” exposes Captain Clark’s incompetency quickly. Through four episodes, he’s gone from being seen as the hallowed American hero who saved Avenue 3 (a previous space cruise ship) to a British actor hired to make people feel safe based purely on a wavering American accent and how good he looks in uniform. He’s an actor playing an actor; a British citizen sporting an American accent; the de facto leader of the show who’s playing the leader of the crew.

When Laurie was told of his character’s true backstory, he struggled to believe anyone, even in a futuristic TV comedy, would fall for his captain’s con job.

“I was sort of grasping a little bit, but enjoying that process,” he said. “It made me curious. It made me ask, ‘Well, how would this work? How would it work in reality, and how would it work in as a piece of storytelling? How do you actually present a character who apparently is so successful at making people feel good and comfortable and productive that he’s worth having along as a fraud?’”

Laurie said the more they talked about it, the more he started to see not only how someone could get away with such an extraordinary lie, but that it’s becoming more believable by the day. Before his flight from London to Los Angeles for the “Avenue 5” premiere, he caught himself thinking about the flight’s pilot and whether or not this “young guy eating a bagel” could really guide their giant airbus to safety.

“I was thinking, ‘Maybe you were top of your class, and maybe you can fly this thing if everything went down and you’ve only got one engine — maybe you could still do it blindfolded… Or maybe you’re a guy who took a course on an iPad and just did OK in the multiple-choice section.’ I don’t know.” 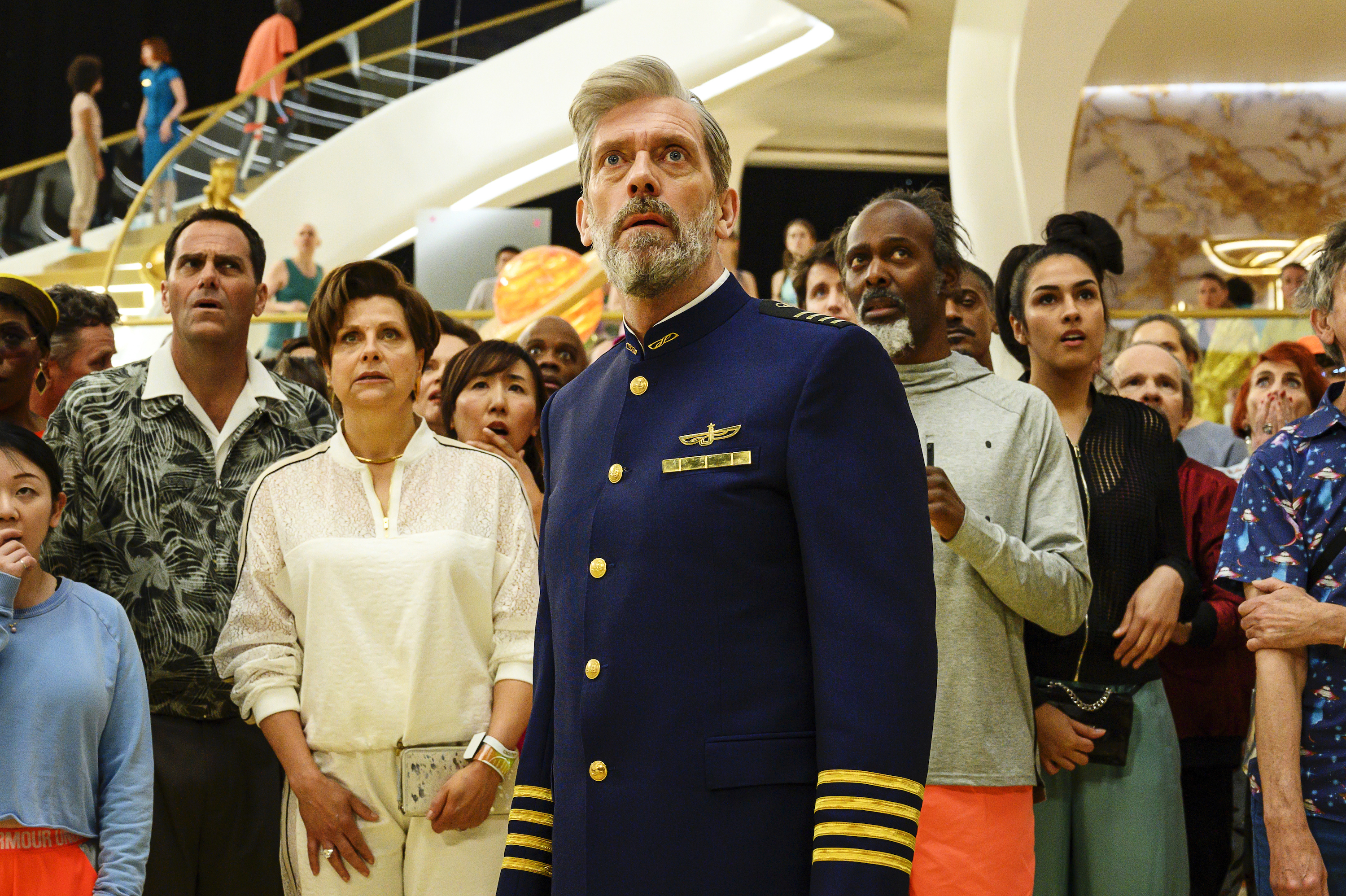 The “I don’t know” is what’s scary; what we don’t know seems to grow on a daily basis. Every time a leader makes a choice that defies logic (like barring witnesses from a trial), the distrust feels more widely applicable to the modern world.

“We don’t know. None of us know any more,” Laurie said. “We are led by people who present certainty and confidence, and ‘We’ve got this. It’s all under control. Here’s the clear way to deal with Iran.’ And in actual fact, most of us, I think, are suspecting that that’s probably not the case; that [our leaders] know no more [than we do]; that they couldn’t find Iran on a map. That may be so or it may not. The point is, we don’t know. We can’t be sure anymore who knows what and who deserves the respect or authority that they’ve been given.”

Such fears should sound familiar to any “Veep” fan, as Iannucci’s first HBO comedy warned against blindly trusting our leaders, no matter what they did, said, or looked like. But it’s not so easy when there’s so much else going down. The people on Avenue 5 don’t have time to crosscheck Captain Clark’s credentials before boarding, just as Laurie couldn’t ask to see his pilot’s license before buckling in for his flight. Everyone has to do their job, and sometimes you just have to trust everyone else can do theirs. The value of that belief can be critical to just getting through the day.

“It’s an almost religious decision,” Laurie said. “Believing in a supernatural being who has our best interests at heart and is watching over us at all times does, at least, allow you to get on with other things. I can now go out and plow the field because I don’t have to investigate the botanical components of the process I’m undertaking. I can just trust the providence or the divine creator will keep an eye out for me.”

As “Avenue 5” enters its back half, the Captain is being forced to take action. Even though plenty of people know he’s a fraud, there’s no one else ready and willing to save the day. Can he earn back his crew’s trust? Can he become the hero he was pretending to be?

“Maybe that’s one of the things that [Iannucci] has correctly identified in me,” Laurie said with a laugh. “That I’m a gigantic fake and therefore I’m ideally suited to play gigantic fakes.”

Or, to look at it another way, Iannucci found an actor to believe in.