‘The Detour’ Deserves a Second Life on HBO Max, Along With Cable’s Other Overlooked Comedies

Posted on 15th August 2019 By davidsharp

The peak TV era has seen many tragic casualties, but basic cable comedies may top the list. From (relatively) long-running critical favorites like “You’re the Worst” and “Angie Tribeca” to short-lived gems like “The Comedians” and “Detroiters,” subscription TV networks without a dedicated streaming component have struggled to turn quality programs into award-winning, buzzy, or high-rated hits.

And if your main goal is to be funny, well, the road to success got that much steeper. Over the past decade, as live ratings have declined and online viewing has increased, plenty of people have wondered whether these shows could’ve burned brighter or lasted longer if there was a simpler way to keep up. Soon, thanks to the streaming wars, we may have an answer.

Enter “The Detour.” The TBS sitcom co-created by Samantha Bee and Jason Jones is set to wrap its fourth season Tuesday, Aug. 20, and despite strong early reviews, continued support from its network, and a loyal fanbase, this family comedy isn’t exactly a TV sensation.

“I truly don’t actually feel — and I’m sad about it — that ‘The Detour’ gets enough love out there,” co-creator Samantha Bee told IndieWire in a recent interview. “It is really funny, and I think if people knew how funny it was, I think that they would gravitate to it.”

That’s no slight to TBS, which has stuck by the series for four seasons, put the first three seasons on Hulu to raise awareness, and continues to plug away promoting its very funny comedy online, at festivals, and through plenty of on-air advertisements. But there’s a disconnect. Anyone who finds “The Detour” now still can’t watch all of the episodes without a cable subscription. People paying for TBS can stream new episodes after they air, but nine weeks into Season 4, Hulu subscribers are still stuck at the Season 3 finale.

Natalie Zea in “The Detour”

Asking viewers to get a cable subscription in order to watch one show is a doomed proposition, and without one simple and inexpensive way to keep up with “The Detour,” awareness has dipped. Season 4 is down nearly 30 percent from Season 3 in total viewers, and more than 30 percent in the 18-49 demo. That’s similar to other TBS comedies like “The Last O.G.” and dramas like “CLAWS,” which indicates more of a shift away from linear viewing than a disinterest in a specific program.

Enter HBO Max. Hailed as “the future of streaming” by WarnerMedia, the much-hyped over-the-top service will bring together all of the entertainment company’s outlets under one provider, making original programming from TBS, TNT, truTV, The CW, Turner Classic Movies, Cartoon Network, Adult Swim, and more available in one place for a single, yet-to-be-determined monthly fee. It’s similar to what Disney+ is prepared to launch in November, where bundles with Hulu and ESPN will offer access to a plethora of Disney-owned network programming.

Speaking of Hulu, representatives confirmed Season 4 of “The Detour” will stream on the service next year. WarnerMedia hasn’t announced whether the TBS series will be included when HBO Max launches in spring 2020, but it should be. One advantage the streaming service can offer over its competitors (like Netflix and Amazon) is real-time viewing: Subscribers could potentially watch new episodes from various networks as they air — the way HBO Now currently works for shows like “Game of Thrones” and “Succession” — and they could catch up on current seasons as they air.

Bee and Zea are already sold, as the buzz around WarnerMedia’s OTT platform has them believing “The Detour” would be a great fit there.

“I’m really hoping people will gravitate to it. I think it would fare very well on a streaming service, actually, because it is the type of show you can 100 percent binge,” Bee said. “I actually think if it makes it onto the WarnerMedia streaming service, it will do very well there. It kind of needs that in order to catch on.”

“I know that right now everyone is still figuring out what that’s gonna be, but that would be extremely helpful,” Zea said. “When people write about [‘The Detour’], it’s typically a very affectionate thing. People are really invested in a very emotional way to this family, to these people, and it doesn’t go unnoticed.”

That central relationship between Robin (Zea) and Nate (Jones) is one of the driving forces of the series. Bee said, though this is a fictionalized narrative with original characters, their unflinching dedication to one another is inspired by Jones and Bee’s two decades of marriage.

“They argue, they’re ridiculous with each other, but at the deepest core of the show, they love each other so much,” Bee said. “They’d climb a mountain for each other. They’d do anything, and that’s how we are: That’s the reality of our little family life together. We just keep that love and put it into heightened situations.” 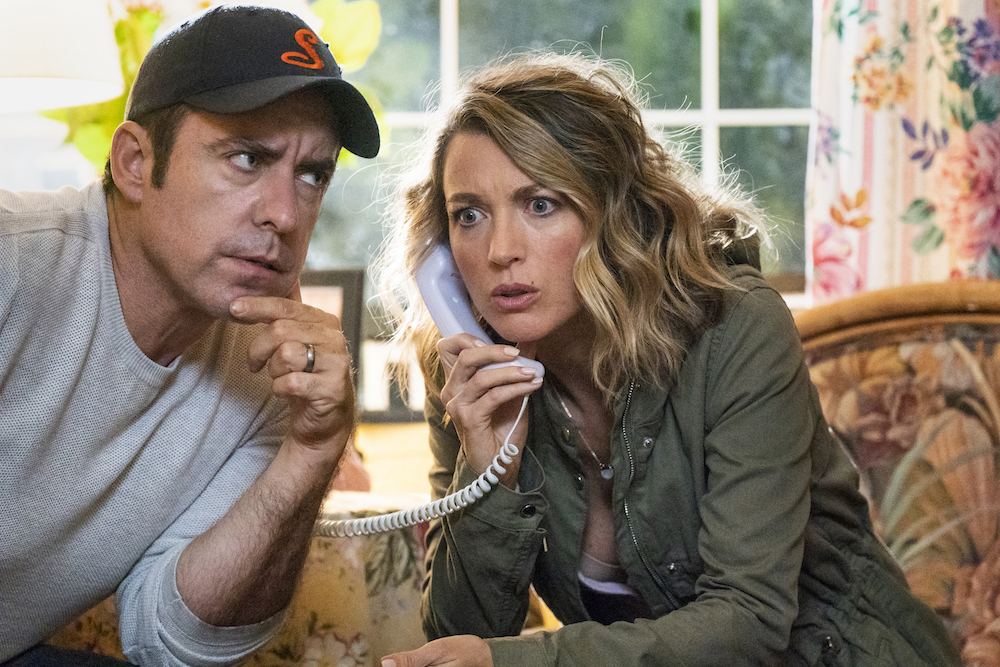 Jason Jones and Natalie Zea in “The Detour”

In Season 4, those situations included going on an eroticized Japanese gameshow and, just last week, taking a calamitous trip to Russia. And it’s here that “The Detour” leans into its top tenet: being funny. While plenty of other half-hour comedies have moved into dramatic territory to make headlines and feel essential, “The Detour” is here to make you laugh each and every hour.

“We all feel like we’re having to do homework these days, when people are using phrases like, ‘You have to watch [this show]’ — I don’t have to watch TV, guys. I want to watch because I’m entertained, and I feel like we’ve lost perspective on that,” Zea said. “We don’t have that flash; we’re not trying to make a great big noise, we’re just trying to be this really genuine, funny, grounded, real, yet terribly absurd show.”

“I’m glad we don’t really shift the show into that [dramatic] terrain,” Bee said. “The cost of that would be that it can’t be all-out funny the way ‘The Detour’ is, and that is just something that’s always been the goal. [Jason and I] have two different shows on the air at the same time. My show takes care of all the political stuff, and so ‘The Detour’ is the more purely comedic wing.”

More than that, the show’s plot is made to keep people hooked. The wildly unpredictable story feels like it can jump in just about any direction at any time, and each episode ends with a twist or a cliffhanger. In other words, it’s perfect for a long, fun binge.

“From the very beginning, we built the show with that idea: that you need to come back to find out what happens,” Bee said. “So in that sense, we pre-built it to do well on a streaming service, just because that’s how we like to watch shows. It’s not like we built it that way to glob on to a business model that really works. We actually just made it that way because that’s how we are — that’s how we like to watch things. We love to feel like we need to come back to a show.”

“I think it is one of those shows where there’s no one way to watch it,” Zea said. “I get the entire season ahead of time, so I get to watch it all at once, and I do tend to binge it over a couple days. That’s a great way to do it. But I watch it week by week [too], just to get a feel of what it feels like to watch this with seven days in between [episodes.] Does the momentum get screwed up at all? Does it feel like you have to catch up? Are people going to get lost? And I feel like it really does work both ways.”

For the foreseeable future, it needs to; with Hulu holding onto streaming rights for Season 4, HBO Max still at least half a year away from launching, and Season 5 yet to be picked up, “The Detour” first needs to get a new season and then it can talk about building a second life online.

“Personally I feel like five seasons is the perfect jewel box of a show,” Bee said. “I’ve always pictured in my mind that it would go five seasons and then wrap up in a tidy bow in this perfect little package; just this little gift that we made and presented to the world, in the hope that people like it. But I’m really not sure because I haven’t heard what’s going on with Season 5.”

“I’m always a fan of wrapping up before you stay too long — in life, in general. I tend to leave parties a little early,” Zea said. So I would certainly want us to not overstay our welcome, but I can’t give a number. I don’t know when that would be. I just don’t want us to start telling the same stories over again. When this story is ready to be done, it should be done. I think that Jason feels the same way, and when we finally decide to wrap it up, I think it will be a mutual decision amongst everyone.”

That’s the goal, and a renewal paired with an extended reach via HBO Max could, at least, help the series ensure the legacy it deserves. For basic cable comedies that have already ended, it’s too late to enjoy life as a streaming sensation, but “The Detour” could still have a shot.